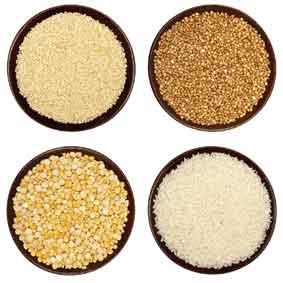 Developed in 1985, the Seignalet diet is primarily a healthy diet whose aim is to treat the patient.  It is totally balanced and involves no risk. It advocates a varied diet which is as close as possible to that of our hunter-gatherer ancestors. That is why it is sometimes called the ancestral diet.

The method developed by Jean Seignalet also considers the molecular form of foods and their quality, and not just their quantity as is the case in conventional alimentology.

The foods we eat have undergone a high number of molecular transformations. Some of these foods, conventionally considered to be “healthy” have become totally indigestible for some of us, the following in particular: many cereals (including wheat and maize), animal milks (in all their forms) and excessively cooked foods (in particular animal fats and proteins).

The method is “gluten-free and casein-free” therefore and advocates fresh foods, raw foods and gently cooked foods. It is totally varied and balanced. It is also described as “hypotoxic” because it excludes elements that are “toxic” for certain people in the long-term.

What makes this method successful is that it works. The results of the method are felt in minor ailments and also in many chronic diseases. (See the section Efficacy of the diet). The onset of action varies from 1 month to 1 year, but most people soon notice the effects. For example, their digestion is better, they wake up feeling rested and they are in better spirits. For those with many accumulated toxins, a temporary period in which symptoms worsen corresponds to a phase in which toxins are eliminated. When this elimination is complete, they feel the benefits of the method.

The patients treated by Dr. Seignalet have more than 115 diseases in total.

Out of these patients, 91 reacted favourably to the diet which offers hope in many diseases. These patients have followed the Seignalet diet strictly and the effects were perceptible after varying periods. The initial effects of changing diet were felt in very different ways, after several months to 2 years.

The tables below summarise the results obtained for each disease in more than 2,500 patients. Today many other people follow this diet and you can see from surfing the net that many of those who have tried it are happy with it.

·         For more than 20 years, Dr. Seignalet followed up more than 2,500 patients with diseases sometimes described as incurable. Out of these 2,500 patients, 2,250 experienced an improvement because of his nutritional method.

“For the diseases where I have been able to collect more than 15 subjects, there appears to be no doubt about the frequency of therapeutic success. This applies to rheumatoid arthritis, ankylosing spondylitis, Gougerot-Sjogren syndrome, hypercholesterolaemia, functional colopathy, recurrent ENT infections in children and acne. In other diseases where few people were tested it would appear reasonable a priori to be more cautious and to wait until larger numbers of patients and more data are available before taking a definitive position.”

·         Therapeutic success when obtained is plain to see. It is appropriate to talk in terms of remissions rather than cures because stopping the diet is generally followed by relapse after several weeks or several months.

·         When the diet works, an elimination period that can last from several weeks to several months manifests in various unpleasant symptoms which are the results of harmful molecules leaving the body: headaches, mouth ulcers, diarrhoea and weight loss. This unpleasant period is temporary and also encouraging since it represents the first phase of therapy: clearing out molecules that are clogging up the body. It is important to be careful, however, with people who are frail and weak to ensure that they do not lose weight too rapidly. It is advisable to stop the diet for a time and to resume it gradually.

·         The therapeutic success of the diet often means that a high number of medicines can be eliminated. However, these medicines do not prevent the method from working and they are gradually eliminated with the agreement of the treating physician if the patient’s state of health improves.

These patients as well as many people who have noted the positive effects of this diet in themselves or in their patients are the best advocates of the Seignalet diet today.

The classification of diseases

The classification developed by Dr. Seignalet distinguishes between 3 physiopathological mechanisms; certain complex diseases may combine more than one of these processes.

The hypotoxic method is based on this scientific reasoning. It explains, step by step, why, at the microscopic level, poor nutritional choices can cause harm to a certain number of people (genetic predisposition) in particular those with chronic disease.

"I think that real autoimmune diseases as conventionally defined are rare and make up a tiny minority only. I would put ITP in this group and maybe myasthenia. The original diet is powerless here and medicines remain the only recourse.

The vast majority of these diseases are actually xenoimmune. They are a normal immune response, followed by a normal inflammatory response, to tissues that were definitely healthy initially but which harbour an undesirable host made up of an antigenic peptide from the environment."

The first of these mechanisms, the mechanism causing the autoimmune diseases, takes into account the function of the HLA molecules, on which Jean Seignalet was one of the world’s leading specialists. These molecules help to defend the body. For Jean Seignalet, taking these molecules into account helps to explain the immune system dysfunction seen in many cases of autoimmune disease.

As the Autoimmu, the theory of clogging and the theory of elimination are based on the hyperpermeability of the small intestine (Leaky gut). But these mechanisms operate in different ways:

"In 1991, thinking about waste which was intestinal in origin that I implicate in the development of many diseases led me to distinguish peptides and proteins that can generate an autoimmune disorder and the other substances that are incapable of triggering an immune response but are harmful when they are deposited in the tissues. The gradual clogging of the extracelluar milieu, plasma membranes and intracellular milieu ends up by disturbing the function of certain cells"

·         The harmful molecules which “wander” clog up the cells, interfere with their communication and can even “penetrate” inside the cells. These are known as clogging diseases.

"The white cells whose conventional function is to fight against the aggressors of the human body, bacteria and viruses in particular, probably have another mission in addition to fighting germs. It is plausible that they act as a “garbage man” whose responsibility is it to purge the body of unwanted waste"

·         The body attempts to eliminate the waste that has penetrated the body by expelling them by one of the body’s emunctories (filters). These are known as elimination diseases.

(See the results above) 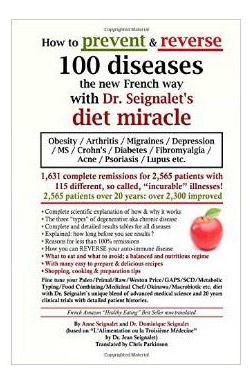 BUY THE BOOK ON AMAZON